My son and I spent an afternoon at the Colorado Wolf and Wildlife Center located near Divide, Colorado.  Their work and their goals are both simple and incredible and difficult: restore native wolves to their necessary role as a keystone species in the wild.

If you’d like a primer on why this is important, check out the remarkable changes–mostly unexpected benefits–that resulted from re-introducing wolves to Yellowstone.

Part of our visit included a tour of the facility to “meet” the members of their pack.  Mexican grey wolves, grey wolves, coyotes, red and swift fox…  We had the opportunity to greet them all.  While some creatures were of course more shy than others, it was obvious from the animals’ confident posture and, frankly, their willingness to walk away that they felt neither fearful of their human companions nor needful or dominating them.

Then Dev and I had the opportunity to meet some wolves up close and personal.  We entered a two-acre enclosure with a pair of guides, took a seat among the trees, and waited to see if the wolves were interested in us.

Two of the three were.  The third, I swear, snorted and rolled her eyes before trotting off to ignore us from a distant.  She’s not all that interested in humans.

But her packmates, Kekoa and Keyni, are.

Wolves are big–not silly “big bad wolf” big, but big enough to make their wishes and presence known.  They most certainly are not dogs in wild clothing; they are distinctly different in temperament and behavior.  Sure, the wolf was happy to have a backscratch… but don’t try to ruffle the ears or snuggle closely.  And when a domesticated pupper might come when called even if she doesn’t want to, a wolf is so extremely not interested in such human-centric niceties. 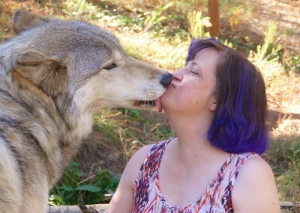 but it was Keyni who nudged him aside to straddle my lap and nuzzle closer any moment I paused in my petting and scratching. 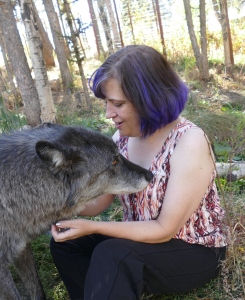 Kekoa did indeed love my son, and did not want to wander far from him.

And Keyni was more than happy to pose for final pictures once he scented the hunk of raw beef in my hand. 🙂

In the middle of all of it, we humans made an attempt at howling.  The wolves obliged us with a response, with the coyotes joining in, and the calls and answers went on for minutes, echoing through the trees, and I stood there and wept knowing that I, for just a few moments, was part of it.

One thought on “Wolf Kisses”