This article originally appeared for patrons only at Patreon.  Because they’re wonderful patrons, they support making the articles on self-defense and fight scenes available to everyone within a month of the original posting.  So if you like it, thank the patrons, or consider becoming one yourself!

Run away when you can!  First rule of self-defense! 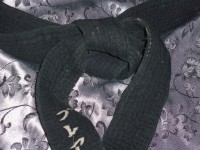 Hang around martial arts and self-defense instructors long enough, you’re bound to hear this advice given over and over.  Some would tout it as the most important advice, but it’s most akin to, “Major in engineering (or whatever is financially lucrative),” or perhaps “Always eat organic foods.”

The temptation to make “run away” the foundational principle of self-defense lies in its simplicity.  But since the advice is usually given rather than taught, its limitations are rarely considered, and how to use it as a successful and integrated portion of an overall strategy isn’t much discussed.

The most important piece of self-defense advice is actually, “Avoid the fight, or make it as short as possible.”  That’s the defining strategy to avoid harm to self and others.  “Run away” is but one of many possible tactics in support of that strategy.   But the conditions under which it’s the best  option are limited, and teaching it as one’s primary technique is as responsible as teaching everyone in the world to take the stairs instead of the elevator in order to improve their health.

Since most self-defense instructors were taught by—and teach, and are themselves—people of a certain baseline fitness and physical mobility, the assumptions behind “run away” aren’t always examined.  So let’s take a look at them, and narrow down the circumstances under which running is indeed the best option.

First, understand running away is not a passive act.  It is resistance.  It is an escalation.

The moment a victim chooses to run, the attacker must decide if the victim is a lost opportunity—not worth additional action—or a threat to survival.  If the fleeing victim is thought to pose a threat, the attacker must then decide whether the best way to neutralize the threat is to escape it by doing their own running, or to capture and control it.  And if capture is determined to be best, the victim is no longer running from a fight.  He’s being chased down by one.

Mind you, I’m not against running.  I am for understanding and teaching its limitations.  Such as…

1.  Running-is-best assumes you have both greater speed and stamina than your attacker, and you happen to be wearing more running-appropriate clothing and footwear as well.

Certainly some folks can train well and hard to increase their ability to run.  Certainly folks can choose to always wear run-friendly shoes (or, as some advocate, learn to run like the wind in heels). Certainly many more folks would sigh over those options because…

2.  Running-is-best assumes you don’t have a limiting physical condition.  Asthma, gout, arthritis, injuries, third-trimester pregnancy, vertigo…  I can’t tell you how many self-defense teachers will brush those concerns aside with, “Adrenaline will make it possible!” or “You’ll be surprised what you can do when you have to!” or the most toxic “You can do it if you really try!”

And if we all clap our hands and really-o truly-o believe, Tinkerbell shall fly again.

Y’all know by now I deal with hip dysplasia.  That hip has collapsed unexpectedly while I’m just walking.  I and others who deal with similar and more severe issues know better than to count on The Think Method as our primary means of escaping trouble with a capital T.

3.  Running-is-best assumes you aren’t in the company of someone who needs your help in the face of a threat.  A child.   An older parent.  A partner or friend who uses mobility aids to get around.  Someone who has, say, hip dysplasia.

Most assuredly, you might still be able to run.  But it’s bad form to leave behind those who can’t run away from what you’re escaping.

4.  And running-is-best assumes you have a place to run to that is better than where you’re running from.  I understand the urge to believe anywhere is better, but that’s a false—and therefore dangerous—belief.

Consider the 11-year-old boy who, lost in the woods, hid from would-be rescuers for four days because his parents had been very clear on “stay away from strangers,” but never added, “go toward these people.”  And all it takes is one wrong turn to go from a populated area that might discourage an attacker to a deserted alley holding no deterrence at all.

To sum up: The tactic of running is most likely to succeed when you are alone, dressed to run, fit and able to run faster and farther than your attacker, and have a safe destination in mind.

So… what about all those other times?

Buy time, and buy it loudly.

As I said above, every act of resistance—every choice that is not total compliance—is an escalation of the encounter.  The attacker’s response to the escalation is not within the victim’s scope of control, but the victim can do things to deter or narrow responses.

Chase down a victim  is not the same decision as chase down a victim who already jammed fingers into my eyes.  Or rammed knuckles into the windpipe.  Or whipped a cane against the knee.  Or swung a loaded diaper bag across the nose.

You see, every single act of resistance before the running (or the jogging, or the limping) adds a variable to your attacker’s plans.  Increasing the number of variables tends to decrease the assumption of success.

Unpredictability increases the likelihood of failure, and failure for an attacker means physical pain, public discovery, loss of freedom, and possibly death.  Merely running gives the attacker a single calculation to perform.  Striking and screaming before running exacerbates the attacker’s doubts.

Since I know I can’t count on my hip to hold up under pressure, I will choose my strikes according to how much they’ll slow pursuit.  I will always choose a kick to the knee over a punch to the jaw, a sharp jab to the eye over a shove to the chest, and a fist to the throat over a knee to the gut.  I might be able to sprint; I might have a leg collapse in mid-stride.  Thus I want to leave my attacker struggling to breathe, or see, or limp rather than capable of chasing me down in rage because I bopped him in the mouth.

And do not for a moment buy in to the judgment of, “If your attacker is so close you can’t run away, you’ve already done something wrong.”  It’s a snooty philosophy that assumes telepathic and precognitive skills alongside a life lived either in utter solitude or perpetual paranoia.

Yes, it’s true: a well-trained person will have the skills, calm, and reflexes to attempt to talk an attacker down, or redirect the aggression, just as a well-trained person in the right circumstances can indeed run away without suffering further consequence.  And it’s really nice to think of running away as an element of non-violence without its own moral cost.

So why, you ask after all that, is running touted as the bestest and most common self-defense advice?

Quite simply, because most teachers teach only the able-bodied, or the close-to-able-bodied.  Most instructors never have to answer a fearful, “But what can I do?” from a man using a cane or a woman a month from giving birth.  Most instructors don’t even mention the cascade of decisions that come into play when a person must consider what their choices will mean for the six-year-old at their side.

Telling someone to always run away first is simple.  Following such advice often isn’t.

So absolutely run if you’re able to run, and if the consequences of running are acceptable to you.  Just know your intentions, understand your assumptions, and consider your options before you do.

If you found this article valuable, and would like to see more, consider becoming a supporter through Patreon!

One thought on “Putting “Run Away!” In Its Proper Context”