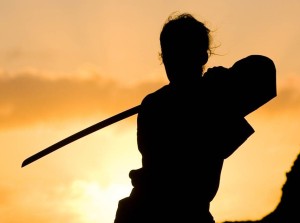 Back in June, Anne Johnson hosted my guest blog post on writing gender equality in epic adventure fantasy.  Just a couple days ago, this 2011 story got a bump when it was featured on Tor.com.

And it got me thinking…

Let me say from the start that it’s fabulous to see archeologists pay better attention to little details like the sex of the folks they’re researching, particularly when they’re defining the culture based upon that research.  It’s awesome to see the combat-based contributions of women have made throughout history acknowledged.  And the more articles we have like Hurley’s We Have Always Fought, the better.

But as tempting as it is to wave that research around — “See?  We can have women in our stories!  History says so!” — it’s important to acknowledge the fact we don’t need to justify our stories.

Folks who want to blather about the historical inaccuracy of women as warriors don’t demand archeological evidence of, say, singing swords or shapeshifters.

Humans who turn into bears or deer?  That’s cool!  Swords that contain the souls of past warriors?  Awesome-sauce!  Massive battles fought with giant balls of energy that blast castles into dust and tear craters in the earth?  Bring it on!

Women in battle as equals?

Fuck, no.  Suspension of disbelief won’t even cover it.  Magic beans are much simpler for some poor souls to grasp.  And far, far less disturbing to the worldview that preserves their dominance by demanding others remain weak.

It’s easy to fall into the trap of arguing evidence in order to justify our preferred characters and plot choices.  But when it comes to storytelling, it doesn’t matter if 10% or 50% of real-world Viking warriors were female.  It doesn’t matter if women were, historically, welcome in the ranks or if they had to bind their breasts and pretend to be men.  It doesn’t matter because we are talking about fiction.  No writer of fantasy needs to play the “Is this historically accurate?” game unless that writer’s goal is historical accuracy.

It’s called “worldbuilding.”  Not worldcopying, or worldmodeling or worldproving.  Worldbuilding.  And some writers build worlds that involve men and women treating one another with respect based on shared humanity.

(Folks who have a problem with that ought not to read my books.  Really.  We’d all be happier if those folks just moved along, hmm?)

Worldbuilding must still involve logic.  A culture that expects women to fight must also reflect other integrated expectations.  The writer needs to consider things like birth control, pregnancy, and menstruation.  Nursing and childrearing.  Inheritance, agricultural duties, and so on and so forth.  Training and command decisions must acknowledge individual strengths and abilities without using gender as the starting point.   Even the words and phrases soldiers use to tease and insult one another must reflect those expectations.

The cultural mindset must default to, “How weird that you even ask why she’s a soldier,” instead of “Justify her presence!”

Think of how many things would different.

We’re not there in our own culture, alas.  The most recent conversations about stolen nude photos, drug-detecting nail polish, and rape-threats that result from having opinions would be defining events of a fictional world—a culture unwilling to hold violent men accountable for their actions if their preferred targets are women and their preferred violence involves sex.

Truth is indeed stranger than fiction.

So bring on more research of the roles women have filled through the ages.  Let’s highlight those women who defied their culture to carry a weapon, and those women who fought in the ranks with acceptance from their fellow soldiers.  Let’s learn as much as we can so we can see a more complete picture of our history.

Tell the jerks who want to whine about women and weapons that you’ll let them go first this time.  You’ll listen to all their arguments… as soon as  they bring you the thighbone of a were-bear and a gladius that can yodel.

One thought on “Worthy Regardless”