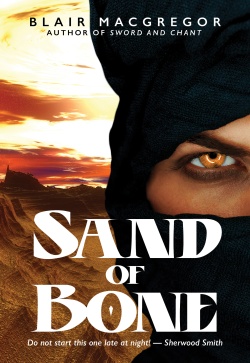 “Searingly vivid, and grittily realistic, Sand of Bone slams the reader into a harsh desert world full of complex people, tense moral dilemmas, and an exhilarating jet of the weird. Do not start this one late at night!” — Sherwood Smith

Syrina – descendent of the gods, one of the Velshaan who rule the deserts and deltas, cast out by her bloodkin for daring to reject their intrigues.

They thought exile to Salt Hold – surrounded by parched earth and outcast Blades who despise her – would end her defiance. But Salt is safer than the grand alcazar of home when she uncovers the secrets of commanding sand, fire, water, wind – the power mixed with ambition that nearly destroyed her bloodkin in generations past.

Pyrius was the desert’s most respected Blade Commander until the bloodkin sentenced him to Salt. But he finds a way to keep his Blade vows while still exacting revenge: serve the exiled Velshaan Syrina. When her bloodkin’s threats become actions, Pyrius sets a plan in motion that will either prevent the looming civil war simmering in the desert’s heat or see them all fed to the sands for sedition.

Because Syrina’s ability to touch the desert’s deepest elements is still fickle and raw – too weak to defeat her bloodkin, strong enough her bloodkin want her stopped before she learns more. The gods demand a soul in trade, and the fate of the living rests upon the redemption of the dead.